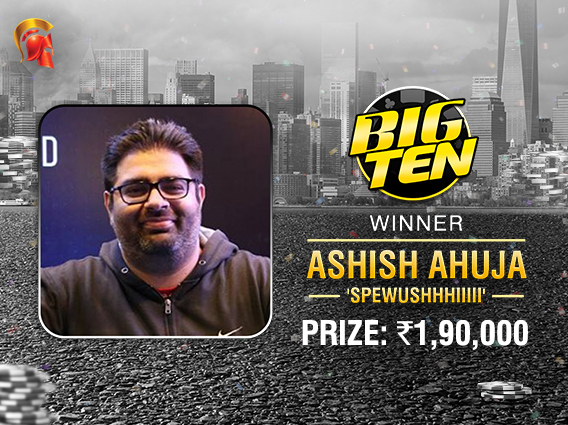 
A typical Sunday on The Spartan Poker is a high-stakes affair with plenty of pros and big talents from the community in contention. Since Sunday is a day-off for most of the players, they get time to indulge in their favourite game and hopefully win something big too.

Yesterday, Spartan hosted Big Ten INR 10 Lakhs GTD for a buy-in of INR 2,200 on its platform. This is a new tournament which saw its first run yesterday. The tournament attracted a good turnout of 483 entries (including 54 re-entries and 166 re-buys). Top 45 places were paid for a min-cash of INR 5,500.

The player to ship this inaugural Big Ten was well-known regular and one of the top talents in the community, Ashish Ahuja aka ‘Spewushhhiiiii’, taking home INR 1.9 Lakhs as 1st place cash prize. He beat Shawn Chatterton aka ‘Ch0pUrNutZZ’ in heads-up to secure his 1st place.

The final hand of the tournament happened roughly 6 hours since it began on Spartan. The tournament had begun at 6 pm and ended at 11.59 pm yesterday. Ahuja was already with an overwhelming chip lead of over 18:1. He went all-in pre-flop with Ah Td. He received a call from Chatterton, who had Jc 9c. The board came to 3c Ad Ks Kh 2s and Ahuja hit Aces and Kings beating his opponent’s Kings pair. The runner-up eventually had to settle for INR 1,37,500 as 2nd place cash prize.

Ahuja, someone who’s very well established in the community, has bagged a lot of title wins and deep runs in the past. December 2018 saw him win Spartan’s signature 2.o.K too, having won Spartan’s Triple Bubble a few days prior. He also bagged the BSS SuperStack title in November last year for INR 2.7 Lakhs. This Big Ten win will surely see him convert it into bigger cashes in the future, and given his skills, it’s not at all impossible for him.

Keep reading GutshotMagazine.com for more similar tournament results, roundups and for general poker news from around the world.