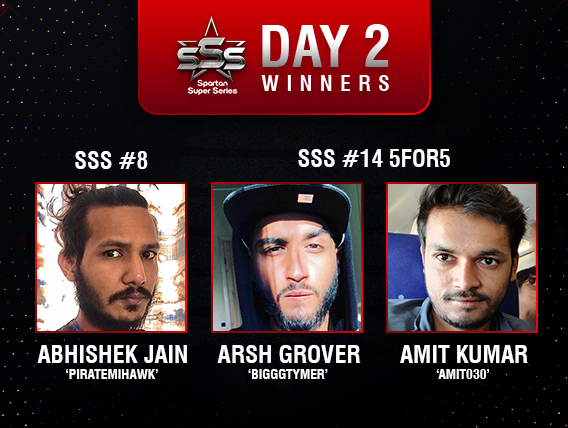 
We are two days into Spartan Poker’s April edition of Spartan Super Series (SSS) that guarantees INR 11+ Crores. Seven tournaments were scheduled yesterday all of which ended successfully with TGIF recording a massive field of 1400+ entries. The 21-day lockdown is attracting large number of poker fanatics and SSS has always been a star attraction of the month. Once again reminding you, two Millionaires and Highroller tourneys are also on the list! So, keep reading to find out who championed yesterday…

The first tournament of the day drew 545 entries to collect INR 2.72 Lakhs in prize pool. Top 39 players were paid out INR 1,880 and walking away with the lion’s share was online grinder Abhishek Jain aka ‘PirateMihawk’ who defeated the winner of SSS Day 1 ‘Big Fizsh’ in level 44 of the tournament, eventually collecting the winner’s prize money.

The second tournament attracted a total field 438 to collect a prize pool of INR 8.76L which was shared by the top 39 finishers who earned INR 6k. Coming out on top was ‘_omkar’ after the players settled for a heads-up deal and gradually saw his opponent ‘ekumar14’ settling in the runner-up position.

A total of 628 entries pounced on the field to hunt for the cash prize in the third event of the day. Only the top 55 finishers could increase their poker bankrolls while others returned empty handed. The largest share of the final prize pool of INR 6.28L was taken away by ‘Megamindd71’ after the players struck a 3-way deal and ‘PokerStar090’ secured the second-place payout.

SSS Day 1 winner Chandran Ramasamy aka ‘mechchan01’ rode past the field once again to take down the fourth tourney. The champion outlasted Kunal Sharma aka ‘cvc’ in heads-up with his AA22 over Sharma’s 7722 to secure the second consecutive title. A total of 419 entries logged in to create INR 4.19 Lakhs in prize pool which was shared among the top 31 finishers.

This was the Friday featured tourney which garnered a massive field of 1,443 entries enough to smash the advertised guarantee and create a juicy INR 21.64 Lakhs in prize pool. Powering through the field to grab the biggest piece of the same was ‘Buuuoooyyy’ who railed out ‘CrownUpJr’ in heads-up to grab the winner’s title along with an impressive prize money.

The biggest tournament of the SSS Day 2 was The Elite INR 50L GTD which displayed a fixed buy-in of INR 11,000. Attracting the high stakes players, a total of 622 entries was enough to create a final prize pool of INR 6.22 Lakhs. The top 55 places earned INR 30k at least and the one to take home the title of the night was ‘lol this guy’ who defeated the previous SSS #61 Millionaire Saurabh Rohila  aka ‘darksider’ in heads-up.

SSS day on Spartan Poker ended with INR 50K to top 5 players which pulled out 428 entries after the players chipped in INR 1,100 individually. After hours of intense grinding, it was Arsh Grover aka ‘BigggTymeR’ to end up in the first place. He was followed by ‘DARLING MINION’ (2nd), Amit Kumar aka ‘Amit030’ (3rd), ‘Chiragnappa’ (4th), and ‘hzgod’ (5th), thus ending the day successfully!