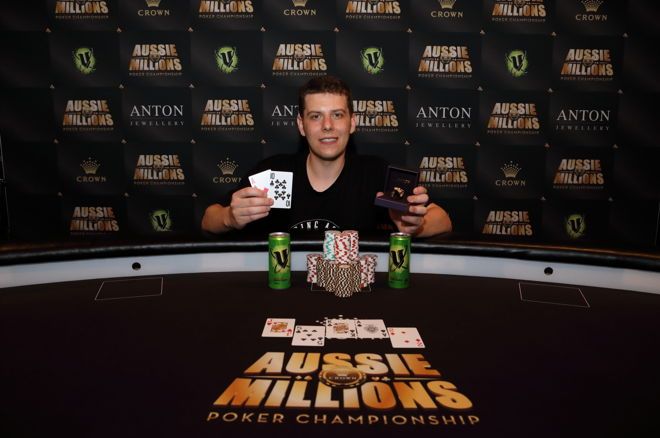 
The 2019 Aussie Millions, underway at the Crown Casino Melbourne, is witnessing some amazing poker in Australia. The first major tournament in the series which started on 15th January was the AUD 1,150 Opening Event, which drew a record turnout and was won by Muhammad Asad for AUD 219,908. The series got the best players across the world to sign-up for its events, and more are expected.

Canadian pro Ari Engel won his second Aussie Millions ring this time, winning the AUD 1,150 Mix-Max Event and earning AUD 71,900 (~INR 36.55 Lakhs) as 1st place cash prize. To Engel, Australia is a special country fo Engel, earning his 1st Aussie Millions ring back in 2016 in the Main Event and even an awesome AUD 1,600,000 cash prize. In the very same year, he missed the Mix-Max title by one place and finished runner-up, which could otherwise have seen him bring home his 2nd ring in the same year.

Coming back to the Mix-Max event in the 2019 Aussie Millions, Engel beat Charlie Hawes in heads-up to bag his ring and the title. Hawes took home AUD 65,400 as 2nd place cash prize, which makes his best live score till date, beating the previous one which he finished at 2nd place in the 2015 New Zealand Poker Open.

Engel, on his win, said, “Crown is by far his most profitable venue in the world to play. I mean obviously it’s just because of one tournament, but why would I not come back? Just being at the Crown there’s automatically a sense of deja vu. It feels good, but I’m too tired to feel much.” About Hawes, he said, “Charlie played really well. There’s a good chance if the cards were reversed, he would have won.”

The final 4 was reached and Ari Engel won his heads-up match by quickly eliminating Korea’s Hwan Park (4th). The second heads-up was a long one. Eventually, Hawes called Alex Lee’s shove on the river, having top pair. Lee turned over a pair, but it wasn’t enough for him to survive and got eliminated at 3rd for AUD 23,665.

The final heads-up between Engel and Hawes was with almost similar chips (Hawes with a slight lead). It happened late at night but in the end, Engel defeated his Australian opponent and bagged his ring. “I feel really good here,” Engel said after the win, “I have friends here railing so it’s really good.’

Keep reading GutshotMagazine.com for upcoming 2019 Aussie Millions updates and results as well as general poker news from around the world.