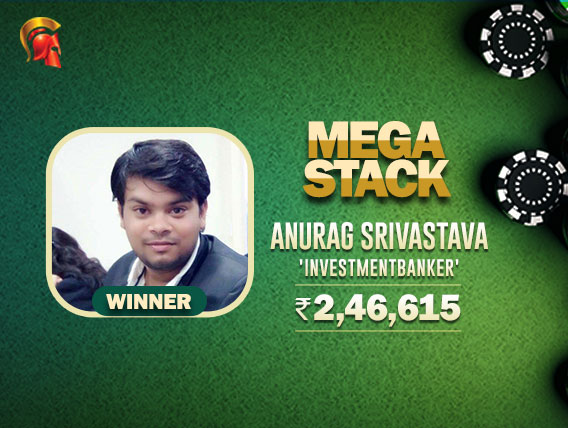 
The Spartan Poker hosts featured tournaments every day of the week and yesterday was time for the popular Mega Stack tournament, which has a buy-in of INR 3,300, a guaranteed prize pool of INR 10 lakh and takes place every Tuesday night at 7:30pm IST.

The guarantee of this popular tournament is almost always beaten and yesterday was no different, with 410 entries registering to the tournament and a new prize pool of INR 12.3 lakh being generated. This allowed the top 39 finishers to be a part of the prize pool with a minimum cash prize of INR 8,487.

It was a long grind for those who made it till the end, with the tournament lasting nearly 6 hours and coming to an end in Level #54, with the blinds at 22,500/45,000 – 4,500. At the end, ‘sasikiranx’ and Anurag Srivastava aka ‘InvestmentBanker’ made it to heads-up, both regular online players who often make it to final tables on Spartan.

In what became the final hand, sasikiranx held Js 6h and Srivastava held 5c 8s. The flop opened 4s 6c Jh which saw hit two pairs and make a small bet, which Srivastava called, with a straight draw. The turn opened 7d which saw sasikiranx shove all his chips into the pot.

This completed the straight for Srivastava and only another J or 7 could save sasikiranx. The river card opened 8d and Srivastava improved on his straight to win the pot and the Mega Stack title. Srivastava ended the month with this big win and he was awarded INR 2,46,615 for this effort. sasikiranx wouldn’t have been too disappointed either, taking home INR 1,63,959 for finishing in second place.

Gutshot caught up with Srivastava after this big win. The 25-year old has completed his MBA in Finance and has been playing poker since 2010 (Zynga). What’s special about this win is that it also helped him finish at the top of Spartan’s Hot Tournament Leaderboard for the month of July.

He was awarded an additional INR 5 lakh for topping this leaderboard. It has truly been a good performance by him all month, shipping the Big Daddy tournament at the start of the month, finishing second in a Destiny tournament and then also 3rd in a Sunday SuperStack tournament. Check out our full interview with July’s Hot Tournament Leaderboard topper here.

Keep reading GutshotMagazine.com for similar updates on the biggest and best poker tournaments across India.