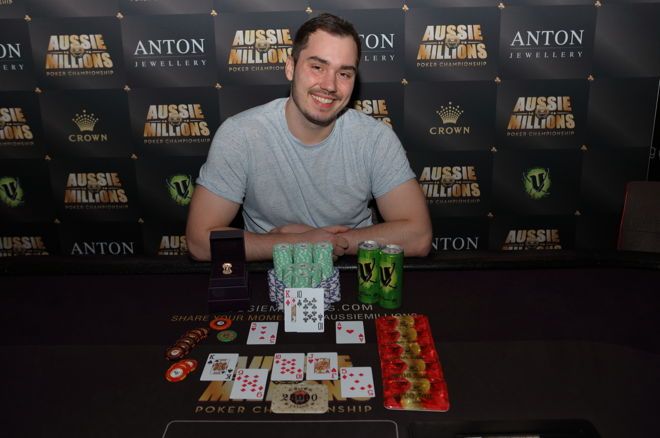 
The biggest poker series in the southern hemisphere of the globe is wrapped up. The 2019 Aussie Millions is all done for the year with plenty of records broken and heavy cash prizes being showered throughout the 21-day period (15th Jan – 4th Feb). The AUD 10,300 Main Event, the gem of the series, was won by Bryn Kenney.

Along with that, the last Pot Limit Omaha (PLO) tournament of the series, the AUD 25k PLO just got into the books on the final day of the series as well. Hungary’s Andras Nemeth was leading in chips at the end of Day 1 among 16 total progressors, but on the final day, things changed and the 12th in chip counts – Anton Morgenstern – won the tournament for the 1st place cash prize for AUD 530,640 (~INR 2.76 Crores) out of the top 7 places that were paid.

Morgenstern’s heads-up opponent was Colombian pro Farid Jattin, the latter having almost 4:1 chip lead. “I went into the heads-up match honestly expecting to just get second and be happy with it. But sometimes the cards just come your way and you fight back. When we finally got even in chips he was asking for a deal, and I declined…and flopped a full house the next hand!” Morgenstern commented.

The final hand of the tournament saw Jattin with Kc 9h 7d 5s and Morgenstern with Kc 10c Ah 3h. Both got their chips in on the flop of Ks 9d 10d. The turn Jh and river 5d saw Jattin hitting Kings and Fives but the German pro took home the title and his namesake, the Aussie Millions ANTON ring, with Kings and Tens.

Morgenstern hails from Berlin and has over $800k in total live earnings till now. He made his biggest cash of $285,408 finishing 20th in 2013 WSOP $10k NLHE. Among his recent deep runs include finishing 13th at 2018 WSOP $10k PLO Championship and 7th at the NLHE Marathon in the same series. Morgenstern later said, “From almost bubbling to winning it, that’s pretty good! For the last three years Omaha has been pretty much my main game.” He’ll be hoping to add more cashes to his name in the upcoming line-up of exciting PLO tournaments around the world.

The notables to hit the rail on the day include Nemeth, David Lim and Sam Higgs. 2018 GPI Player of the Year Alex Foxen was also in the run and was the first to cash at 7th for AUD 96,480. Here are the Final Pay-outs of this tournament –

Keep reading GutshotMagazine.com for more such tournament news as well as for general poker news from across the planet, and much more!