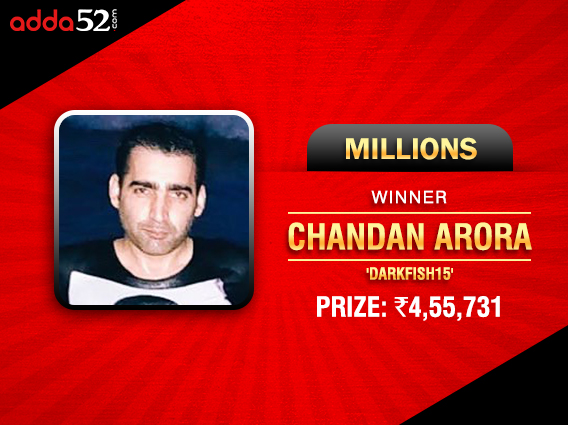 Another chop, another victory for Chandan Arora


Just two days after striking a deal and  winning the Elite on Spartan for over INR 4.5 Lakhs, Chandan Arora played on Adda52 and won their second biggest tournament on Sunday, the Millions 6-Max INR 20 Lakhs GTD for a cool INR 4,55,731 after another heads-up deal.

Adda52 Millions, one of the popular tournaments among action-packed Sundays across India’s platforms, began at 8 pm yesterday evening. The long grind of over 7 hours ended at 3.10 am today morning. The tournament attracted a total of 184 entries (54 re-entries) and Chandan Arora beat them all to be declared champion. He made the deal with ‘Rohan8760’ and took the lion’s share out of the prize pool. The runner-up also bagged a sizeable INR 4,40,269 for having a similar stack at the time of the deal.

We spoke to Arora after his win. About the tournament, he said, “Adda52 Millions is the best tournament on the Indian felt. I have always loved its structure – 6-Max and deep. This was my 7th Final Table finish and 3rd ICM chop. Kudos to Adda52 for hosting such a great tournament.”

Arora also spoke about his complete shift to poker, saying, “I took a one-year break from work last year. And I have been fortunate enough to make it count. Hopefully the hard work I put in everyday will take me to much greater heights. And the way the poker scene is booming in India, I think we are all in for a treat.”

Many people take a break from work or sometimes even quit it entirely to start playing poker professionally. Arora has played and cashed in many tournaments before. Just on Spartan, he shipped two signature tournaments, 5 for 5 in October 2018 and 2.o.K in June earlier. Arora, with the Millions and Elite victory, has finally seen his hard work and dedication pay off and will be especially looking forward to the exciting range of tournaments lined up in the coming future.

Since the tournament was such a reputed one, the Final Table itself was sprinkled with some of the best pros in the community. Shravan Chhabria aka ‘sweatmyass13’ finished 4th for INR 1.8 Lakhs. Pranav Khandalkar aka ‘pkpok’ finished 5th for INR 1.25 Lakhs. Trailing behind Khandalkar at 6th was Goonjan Mall aka ‘gmtesting’ at 6th for INR 90k.

Keep reading GutshotMagazine.com for similar tournament updates and results as well as for timely poker news updates from around the world.