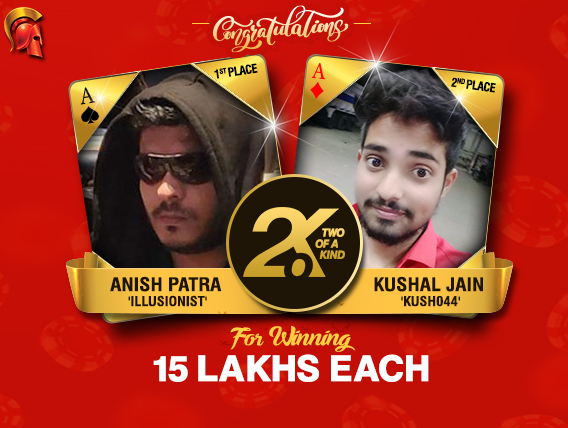 
Every first Sunday of the month, The Spartan Poker hosts their signature tournament, Two of a Kind (2.o.K) INR 15 Lakhs GTD for 1st and 2nd place. The tournament has amassed a great fan following over the months and sees top pros and regs competing for the top two spots. Last month’s 2.o.K saw a huge 1,156-entry strong field which was won by two of the top talents in the community, Sahil Agarwal and Ankush Aryan.

This month’s 2.o.K was hosted yesterday and saw a colossal field of 1,099 entries (including 199 re-entries and 433 re-buys). The tournament began at 6 pm on Spartan yesterday evening and was in the books by 2.18 am today morning. The  8+ hour long grind saw two players Anish Patra aka ‘Illusionist’ and Kushal Jain aka ‘Kush044’ filling the top two positions for whopping pay-checks of INR 15,11,125 each out of the INR 60,44,500 prize pool.

The 3-way play happened between the two and ‘realkidpoker92’. After Jain folded pre-flop, Patra saw good Th Kc hole cards and raised pre-flop to receive a call from realkidpoker92 who had Tc Qd. The Qh Jd 7c flop gave outer straight draw for Patra who bet on the flop. realkidpoker92 called, having matched a Queen. The turn of Qs completed trips for realkidpoker92, but he played it cool by checking. The river of Ah finally gave an Ace-high straight for Patra and he bet 1,536,000. realkidpoker92, confident with his hand, shoved but was soon disappointed when Patra revealed his straight. realkidpoker92 took home INR 6,64,895 which looks like a winner cash prize in itself,so he won’t be much disappointed.

One of the champions, Jain, is relatively a newcomer into the scene and has a few cashes online from previous tournaments. We got in touch with him after the win and he was elated to speak to us. He said, “My journey began from a freeroll Satty on Spartan, which I converted into a 2.o.K ticket and ultimately into the hefty pay-check. At the age of 21, I’m very happy to earn over INR 15 Lakhs for the first time in online poker. Thank you to Spartan and all the team behind the company.”

Talking about last night’s tournament, he said, “The turning point was when I went all-in pre-flop with Queens and my opponent called with Ace-king. The flop was in his favour with a King, but the Queen on the turn gave me a set and made me inch closer towards victory.” The player lastly said, “I will surely make this win worth the while by playing in every upcoming tournament and hopefully shipping it too.“

We even had a chat with Patra who is currently pursuing his MBA in Mumbai. He talked about his background saying, “I’ve been playing poker recreationally since a few years and specialize in the NLHE cash game variant of the game. I play some high value MTTs when I get the time and consider myself to be extremely fortunate to have shipped the 2.o.K on Spartan last night.“

About his experience and gameplay in the tournament, he further elaborated, “The strategy was to play solid, pick my spots, and not get into high variance situations with some of the regulars. I was chipleading from the time there were about 200 players remaining until the end of the tournament. I had about 27-28% of chips in play leading into the final 2 tables and then it was all about applying ICM pressure on the smaller stacks. There were some regs like Amit Ajwani, ‘utgwithyourmum’, and Goonjan Mall at the Final Table, which makes the win even sweeter. Winning an MTT always requires rungood and winning flips, so I’m grateful that the flop was with me last night.“

Overall, the vey popular tournament paid out 70 places last night with a minimum cash of INR 10,880. Until next month’s 2.o.K keep reading GutshotMagazine.com for more tournament results, updates and for general poker news from around the world.