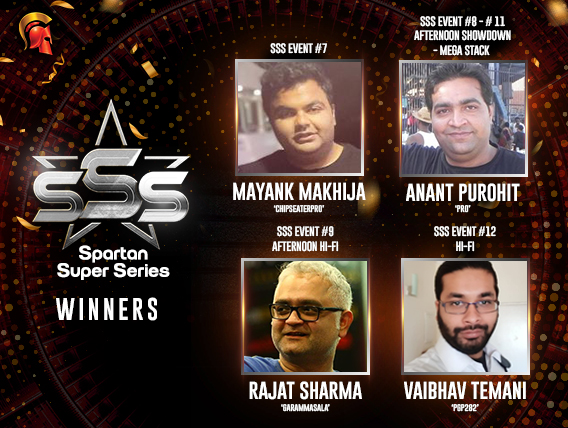 
The Spartan Super Series (SSS) is back in action on Spartan Poker and this time with a guarantee of over INR 5 Crores! A weeklong series is underway with 42 varying events promising big amounts to the worthy winners. Once again, the mid/high stakes players took their seats but star performer of the day was Anant Purohit seizing two major titles on SSS Day 2. Here is a complete summary of the same…

The first tournament on SSS Day 2 commenced with the lowest buy-in of INR 330. A total of 436 players took to their seats but only 31 managed to receive a min-cash of INR 1,188 from the prize pool. However, the lion’s portion of the same was taken away by Mayank Makhija aka ‘chipseaterpro’ who grabbed the first-place prize money. The tournament ended with a 3-way deal, with Makhija accumulating the largest stack of 582k, taking down the first event of the day. In the second place was ‘PapaNegreanu’ while ‘muru’ rested in the third place.

A renowned player in the circuit Anant Purohit playing under ‘Pro’ emerged triumphant in the Afternoon Showdown. A total number of 222 players entered for a buy-in of INR 2,200 and the prize pool was distributed among the top 17 players. Finally, a heads-up deal ended the tournament, with Purohit carrying the larger stack and taking home the first-place prize money, while Neeraj Kumar aka ‘SelfClaimedPros’ ended as the runner-up.

No doubt, SSS Day 2 was power-packed with prominent contenders across the country. Rajat Sharma aka ‘Garammasala’ raced to grab his second title after already winning Afternoon Showdown on SSS Day 1. Sharma strengthened his poker bankroll after outlasting a field of 263 entries. Each player chipped in INR 1,100 buy-in where the top 24 players finished in the money.

In level 36, Sharma entered the final hand with 1.18 million chips holding 5d Ts up against ‘Rudi2412’ with 787k having 4h 2d. The table saw players slow playing until the river card opened. The board ran 2h Js Kd 2c Ad and the latter showed his trip Twos over the former’s single pair of Twos. After this hand, the players struck a deal and Sharma was the official winner with a larger chip stack.

The buy-in once again lowered to INR 880 enticing 199 players in total. Before the tournament halted, the top 20 places finished in the money for a min-cash of INR 2,412. The tenth event saw a 3-way deal and the anonymous player ‘vn2016’ bagged the first-place prize money. Following his heels was ‘RickdickulouS’ in second place and ‘AnkNaga777’ in third place.

What a day it was for Anant Purohit aka ‘Pro’ winning back-to-back titles on SSS Day 2! The biggest guaranteed tournament of yesterday, Mega Stack is a Tuesday feature that attracted 831 players, each of whom chipped in a buy-in of INR 3,300. However, the top 79 contenders managed to survive and cash. This was not the first time that the winner championed two titles in a day, doing so in the July IOPC as well.

Gutshot caught up with Purohit, who expressed, “I was super confident and positive throughout the day. Also managed to run pretty good and I’m quite happy with my performance.” For a complete summary of Purohit’s Mega Stack victory, read our Tuesday Roundup here.

Each SSS day ends with the Hi-Fi being the last tournament. Just like yesterday, the event displayed INR 8 Lakhs GTD and the top 30 players out of a total number of 385 entries received a min-cash of INR 6,000. It was online reg Vaibhav Temani aka ‘pgp282’ pocketing enormous prize money after defeating another known player Vaibhav Sharma aka ‘Nikka Zaildar’ in heads-up.

In level 39, Temani entered the final hand with 2 million chips having Kd 7s against his opponent Sharma with 274k chips holding Ac 3d. The players drew their respective blinds and the table saw the entire stack of both competitors in the middle. The board ran Ks Jc 6s 5s Ts and Temani tossed over a King high flush over Sharma’s high card Ace, ultimately ending SSS Day 2.