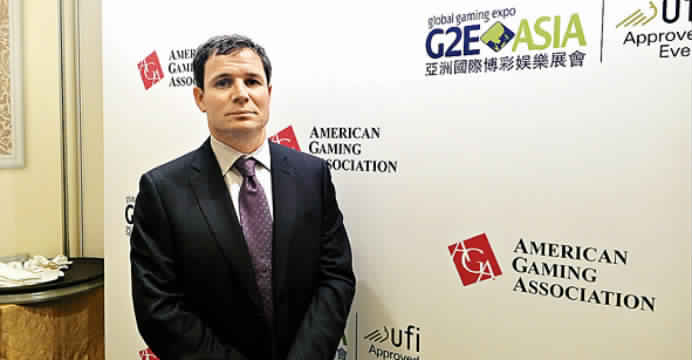 
In a move that surprised some in the casino and gaming industry, American Gaming Association Chief Executive Officer Geoff Freeman has decided to step down as the head of the powerful trade organization.

“The AGA accomplished many important successes during Geoff’s tenure, most notably the recent Supreme Court ruling declaring the Professional and Amateur Sports Protection Act (PASPA) unconstitutional, a decision that paves the way for legalized sports betting in the United States,” Penn National Gaming CEO and AGA Chairman Tim Wilmott said in a statement. Freeman is expected to stay on in his capacity until August 1, at which point he will leave the AGA and become the Chief Executive Officer and President of the Grocery Manufacturers Association. “It is a testament to our industry, as well as to Geoff himself, that GMA would look to gaming as a model for managing through dynamic change and complexity to achieve success in both policy and perceptions,” Wilmott declared. “Geoff has built a strong board and a strong team. He leaves us well positioned for future success.”

Freeman, who took on the role as the head of the AGA following the departure of Frank Fahrenkopf in 2013, leaves the position at a critical point in the gaming world. The Supreme Court’s overturning of PASPA was a monumental point in the lobbying efforts of the AGA, but there has been little direction from the group towards getting the individual states to act on the SCOTUS decision. This is despite efforts from Freeman, who opened a new faction, the American Sports Betting Coalition (ASBC), to directly lobby the states for passing sports betting regulations in their respective areas.

At this point, only Delaware – who was grandfathered in under PASPA but previously had not offered sports betting – has opened for sports betting. The state that brought the lawsuit that saw PASPA overturned, New Jersey, has yet to open for any sports betting action in Atlantic City, although it is expected to start by the beginning of the National Football League season. Other states, such as Pennsylvania, Michigan, Illinois and others, have dabbled with passing sports betting regulations but haven’t yet pulled the trigger.

There are also the problems that Freeman brought about regarding the issue of online gaming and poker. Prior to his appointment to the top slot of the AGA, the organization had cast its lot with most of its constituency, including MGM Resorts, Caesars Entertainment and other casino owners, and was lobbying for the passage of either federal regulation of online gaming and poker or, at the minimum, a state-by-state passage which would legalize the activity. Following the departure of Fahrenkopf, however, Freeman took the AGA on an opposite tack.

In 2014 the AGA, under the leadership of Freeman, reversed its support of online gaming and poker. The AGA stated that the question of that industry was “an issue that the association cannot lead on” and cited that there were questions inside the group as to the legality of such actions. In fact, the only group that opposed making online gaming and poker illegal was the Las Vegas Sands Corporation and Republican megadonor Sheldon Adelson, who reportedly threatened to pull out of the AGA over the issue. Freeman was seen as buckling under to the octogenarian and the LVSC, abandoning the other groups that were encouraging the passage of regulations for the industry. Last year, the AGA quietly once again reversed its position, but they haven’t been a major player in any online gaming and/or poker regulation but instead concentrating on sports betting.

If there is a likely successor for Freeman at the helm of the AGA, it is Wilmott. Wilmott has been able to work his way up the ladder of leadership at the AGA, taking over as the Chairman of the group in November 2017 following the resignation of MGM Resorts Chief Executive Officer Jim Murren from that position. Although his positions on every gaming issue aren’t known, it is expected that Wilmott’s vision for the AGA would not deviate from his predecessors and would make him a logical choice for being only the third leader that the AGA (founded in 1994) has ever known.