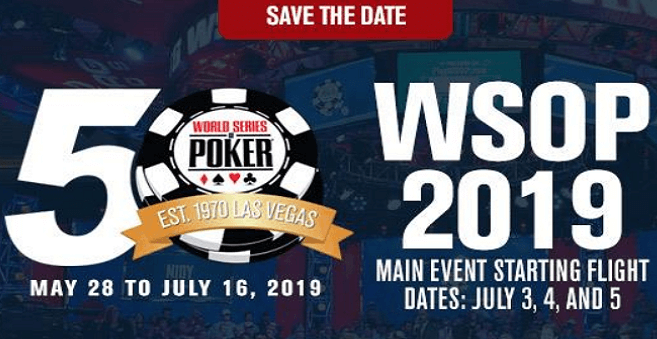 All NLH events in 2019 WSOP will have BB ante; more changes


2019 will see the prestigious World Series of Poker (WSOP) being hosted for the 50th time. Being the golden anniversary of WSOP this year, they have decided to spice up the line-up of events. A partial schedule had been released by their team a few days ago this month. Tournaments like the Mini Main Event, a brand-new Colossus and a Super Turbo Bounty were among the new events added.

A couple of days ago, WSOP revealed some further details of its 2019 series. In a blog post written by Seth Palansky (WSOP’s Editor-in-Chief) on 23rd January, it said, “Gone are the days of a starting chip stack equivalent to the buy-in amount.” The 50th WSOP, scheduled between 28th May and 16th July 2019, will see significant increases in starting stacks.

The $1,500 NLHE last year had 7,500 in starting chips, this year the tournament will see 25k chips to start with. Along with this, all NLHEs will see the Big Blind Ante being followed, including the gold bracelet events, Daily Deepstacks and Mega Satellites.

The BB-ante was introduced by WSOP last year on a limited basis. After further careful consideration and study, they have finally decided to make it a standard in all NLH events. The blog post further clarifies that “If a player in the tournament does not have the required amount for both the Big Blind and the Ante, the Big Blind will be paid first, followed by the ante.”

A total of 40 events have already been announced till now. WSOP has added another 34 events mostly comprising of previous year’s regulars as well as a few new events. Among the new ones is a ‘Bracelet Winners Only’ event as part of its 50th anniversary celebrations. Only 1,078 players in the world have earned WSOP bracelets till now and each of them will be eligible for the $1,500 event that will be hosted on 10th July.

WSOP Vice President Jack Effel said, “It is important the modern day World Series of Poker continues to evolve. People certainly like bigger starting stacks, and we’re happy to oblige while simultaneously adding more value.” Another event, the $500 Big 50 has a guaranteed prize pool of $5 million and is close to finalizing its structure and playing days. For additional information about 2019 WSOP, visit their site here.

Keep reading GutshotMagazine.com  for complete WSOP coverage as well as for your daily dose of poker articles from around the world.