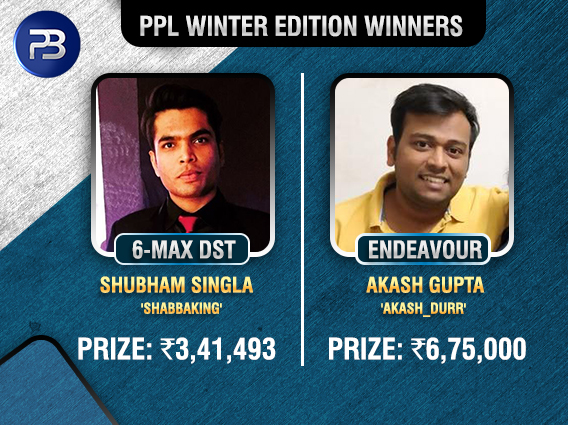 
The much-awaited PokerBaazi Premier League (PPL) Winter Edition began a couple of days back, with INR 5+ crore promised in prize money between 10-16 December 2018. This biggest PPL series yet crushed all the guarantees on Day 1, where the likes of Aditya Kulkarni and Shardul Parthasarathi were the big winners.

PPL Day 2 was another successful day for PokerBaazi, where once again, the advertised guarantees in all five tournaments were broken. Some of the biggest winners yesterday were Akash Gupta and Shubham Singla, while Nishaanth Shanmughasundaram, Sameer Tavanandi and Aditya Sushant also won titles. A handful of pros were in action and on FTs throughout the day.

Here’s a roundup of all tournaments on PPL Day 2:

Yesterday began exactly like it did on Day 1, with an INR 1,100 buy-in tournament. The trend of this PPL continued with 698 entries smashing the guarantee and creating a new prize pool of INR 6.98 lakh which was shared among the top 53 players. Eventually, Sameer Tavanandi aka ‘Killersam’ shipped the tournament, bagging INR 1,30,875 in prize money. He completed the victory after he beat ‘muraxion’ in heads-up who finished second for INR 95,975.

There are some players in India who you just can’t keep away from big wins for too long, and one of them is Aditya Sushant. Playing under the username ‘gangajal’ on PokerBaazi, he didn’t waste too much time in this Time Bomb tournament, shipping it for a prize of INR 54,505 in just a matter of 1 hour and 6 minutes (including a break). 159 entrants registered to the tournament and this took the prize pool up to INR 3.18 lakh, with Sushant taking away top honours after he beat Ramlakhan Meena aka ‘Hitler’ in heads-up. Meena took away INR 39,304 for finishing as runner-up.

The next tournament was an extremely high-value one where 467 entries registered to be a part of the action, each paying the buy-in of INR 4,125. The guarantee was crossed again, with a new and inflated prize pool of INR 17.51 lakh being generated, to be eventually shared among the top 35 players. Several pros were a part of this tournament, with some known ones finishing on the Final Table as well. These include Neeraj Kumar aka ‘SelfClaimedPro’ (4th), Sahil Mahboobani aka ‘ImHighIshove’ (3rd) and Shravan Chhabria aka ‘FishStars’ (2nd) – all taking away 6-figure scores. However, the player to walk away with top honours and all the glory was Shubham Singla aka ‘Shabbaking’, adding the top prize of INR 3,41,493 to his poker bankroll.

Everyone had their eyes on this, the featured tournament of the day, which was packed with India’s top pros as a total of 750 entries joined the action, each paying INR 5,500 to participate. The guarantee was passed by a long way as the prize pool was taken up to INR 37.5 lakh. The dividends were shared among the top 71 players and among the many who took away small cash prizes were Sagar Choudhury (63rd), Jaydeep Dawer (45th), Abhisek Panda (38th), Pranav Bang (36th), Abhinav Iyer (27th), Aditya Sushant (14th) and yesterday’s title winner Shardul Parthasarathi (7th).

As the competition progressed, the bigger pay-outs began and Goonjan Mall aka ‘gmtesting’ missed out on the trophy, finishing 3rd for INR 3.65 lakh. Jayjit Ray aka ‘england’ has been on a good run and he was the player to lose in heads-up for INR 4.96 lakh in prize money. However, the biggest winner of the night was Akash Gupta aka ‘akash_durr’ who shipped the tournament and won a massive prize of INR 6,75,000 for this effort.

This was the final tournament of the night and it kicked off at 9:30pm last night, with a buy-in of INR 1,375. The final tournament also saw a handsome participation of 536 entries, taking the prize pool up to INR 6.7 lakh, which means all 10 of this PPL tournaments so far have had their guarantees passed. Here, the eventual winner was Nishaanth Shanmughasundaram aka ‘shanni’ who added INR 1,28,975 to his bankroll for beating many top PokerBaazi regulars and shipping this tournament, which ended at 3:25am this morning.

Currently, Sameer ‘Killersam’ Tavanandi leads the PPL Winter Edition Leaderboard with 1,330 points for having played all 10 tournaments and having cashed in four. Keep reading GutshotMagazine.com for more updates on the 2018 PPL Winter Edition on PokerBaazi.