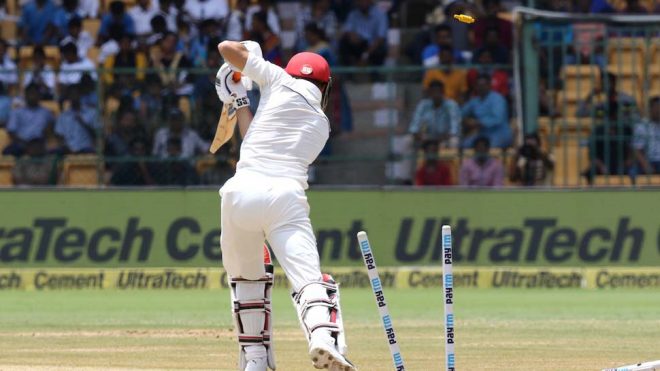 
The excitement was building up over the last couple of weeks in Afghanistan, as they were all set to play the world’s number 1 ranked test team, India, in what would be their debut test match. They recently became just the 12th nation to achieve test status from the ICC, and the moment had finally arrived.

However, it was a dampener for the country of Afghanistan, and even for the fans who bought tickets to watch the match at the M. Chinnaswamy Stadium in Bengaluru, as the action was wrapped up inside two days. Little did they know that India was going to be all over them like a rash!

The game began yesterday, 14th June, with India batting first and both openers Shikhar Dhawan and Murali Vijay getting centuries. India scored at a brisk rate and after a day and a session, they were bowled out for 474, which was always going to be too much for Afghanistan.

The Indian new ball bowlers bowled fine opening spells, denting their opponents early and the spinners then came in to wrap up the Afghani 1st innings within just 28 overs – 109 all out. With such a few overs bowled, the Indian bowlers were fresh and captain Ajinkya Rahane enforced the follow on.

What followed was a carbon copy of the 1st innings from Afghanistan. A complete déjà vu feeling, as the new ball bowlers picked up early wickets and Jaddu and Ashwin cleaned up the tail again, as Afghanistan were bowled out for 103 on the same day, this time managing to play 38.4 overs. India won by an innings and 282 runs. Man of the Match: Shikhar Dhawan.

It was an absolutely disappointing test debut for Afghanistan; one they will want to forget as soon as possible. This match marked the fewest balls bowled by India (399) to record a test victory and it was also the fewest runs scored by any team against India (212) in a game that produced a result. 24 wickets in a day also became the most in any test match in Asia. Phew!

Next, India will play Ireland before their tour of England kicks off. Keep reading GutshotMagazine.com for regular cricket and other gaming updates.