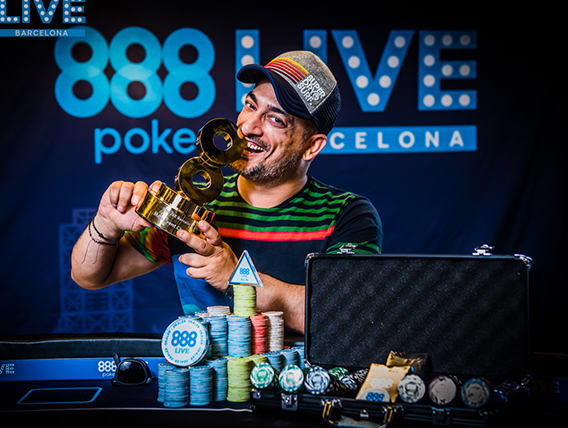 
Romanian poker pro Adrian Costin Constantin went on to win the Main Event title at 888poker LIVE’s edition. For his efforts, Constantin took home first place prize of €114,025 (~INR 89.4 Lakhs). It was not an easyAfter a tough heads-up match against Spaniard Joel Isla, Constantin finally agreed to a deal and triumphed in the €1,100 buy-in event, winning the largest cash in his career.

For 10 days, the beautiful Spanish city of Barcelona was home to the 888poker LIVE Barcelona Festival, which featured a large number of events and a guaranteed prize pool of €1 million. The highlight of the festival, running from May 24 through June 4 at Casino Barcelona, however, was the €500,000 GTD Main Event, which kicked off May 31. Following the record attendance in the opening event of the festival, 888poker LIVE saw another record in the Main Event with a field of 709 entries registering in the three starting flights.

Poker players from all over the world had qualified online on the 888poker network in the previous weeks, while others, including Adrian Costin Constantin, had qualified in the €110 buy-in live satellites held on site. With a total of 709 registrations, the prize pool easily exceeded the guarantee and reached the impressive €709,000, which was split among the top 72 players. By the time Day 3 started on Monday, only 27 players had survived, led by Spain’s Joel Isla who held the largest stack, despite his little experience in live tournaments.

The player who claimed the 888poker LIVE Barcelona Main Event title, however, has participated in plenty of live tournaments since 2014. He has dozens of final table finishes, as well as two first places in large tourneys, namely the €115 NLH Poker IN at Casino Barcelona, which he won on December 8, 2014, and the €110 NLH Turbo event at UKIPT London in January 2015. So far, his largest cash was €49,800 (approx. $56,182) received for his fourth position in the €1,100 NLH Turbo event during EPT 2016 at Casino Barcelona. With the win last night, his total live earnings amount to more than $260,000.

Joel Isla from Spain started the Final Day of the 888poker LIVE Barcelona Main Event as chip leader, having a huge advantage over the others with 2,016,000 in chips. Another player from Spain, Adria Diaz Dalmau, came in second with 1,662,000, followed by France’s Gianny Dominique Morano with 1,466,000, Mark Max McMillin from the United States with 1,413,000 and Canada’s Courtney Gee, who held 1,385,000 in chips. There were six early eliminations, followed by several more, among whom was Day 1A chip leader Gianny Dominique Morano. Canadian player Courtney Gee was also sent home in the 18th place with a prize of €5,350. The chip leader from Day 1C also finished before he could make it to the final table – Netanel Minyan busted 14th and took home €6,200.

The first player to be eliminated from the final table was Poland’s Tomasz Aleksander Chmiel (9th, €9,350) and the next to go was Sergiu Sirbu (8th, €12,250). In fact, the final table was dominated by Romanian and Spanish players, although the next one to bust was Italian Luigi Andrea Shehadeh (7th, €16,350). Spain’s Oscar Casado Diaz left in the 6th place, banking €22,150, while Corrado Martinelli from Italy finished 5th with a cash prize of €27,200. After Cosmin Rusu (Romania) was eliminated in 4th place for €38,200 and then Manuel Navarro Perez (Spain) in the 3rd place for €55,800, the battle for the title and the €144,550 top prize was to be fought between Adrian Costin Constantin and Joel Isla.

The Spaniard had a 3 to 1 chip advantage over Constantin but after two hours of play, the Romanian player’s advantage was 4 to 1. The two then agreed to a deal in which they both received €114,025 and continued to play for the right to claim the trophy. The game ended shortly after with Constantin beating Isla and capturing the 888poker LIVE Barcelona Main Event title.