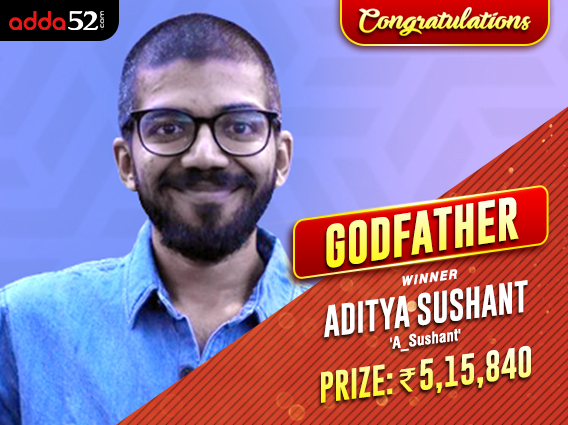 
Adda52, owned and operated by Delta Corp, India’s only listed gaming and hospitality company, is one of the leading poker websites in the country. Adda52 has developed its offerings over the years to suit all kinds of players. Their weekly offerings include some of the best tournaments across the country’s virtual felts.

Yesterday, the platform hosted Godfather INR 20 Lakhs GTD which began at 8 pm. The total of 416 entries (including 173 re-entries) chipped in the IN 5,500 buy-in amount all hoping to become the Godfather of the night. The prize pool even crossed the GTD by an extra INR 80k. However, Aditya Sushant aka ‘A_Sushant’ denied them all the chance, becoming Don Corleone himself. With this, he earned his 2nd Godfather title. He also won Adda52’s 2nd biggest weekly tournament, Millions, an impressive 4 times. Looks like his inner beast is best stimulated only by this platform.

Sushant earned INR 5,15,840 as the first-place cash prize yesterday. Sushant saw himself against someone who had already won a Godfather title. He beat Suresh Kolli aka ‘insanium’ in heads-up. Kolli had won Godfather last November for over INR 5.1 Lakhs. He must’ve put up a lasting battle on the felts, wanting to ship it afresh, but India’s first bracelet winner proved his merit again.

Among Sushant’s recent online achievements include winning Spartan Destiny, 5 For 5, PokerStars Highroller and Adda52 Mega Suits all in this year. He began the year by finishing ITM in southern hemisphere’s biggest tournament, 2019 Aussie Millions Main Event, and was the only Indian to earn a pay-check in it. He even made it to Sochi recently for 2019 EPT Sochi and though he didn’t earn a pay-check, he sure enjoyed his trip as his escapades in the snowy land later made it to Instagram.