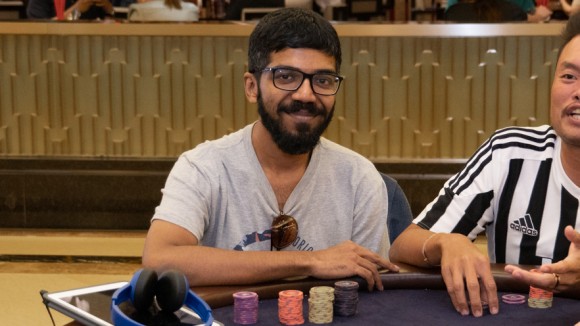 
The industry doesn’t need to be told how good a poker player Aditya Sushant is, but just in case, he will keep reminding you. India’s first WSOP bracelet winner is always boosting his poker bankroll, whether it’s live or online play. Once again, he’s in the news for an impressive run in an international poker tournament.

The prestigious 2019 Aussie Millions Main Event is underway at Crown Casino, Melbourne and Sushant had to be in the mix. Qualifying among 4 Indians from the third and final starting flight, Sushant had a very short stack heading into Day 2. However, talented as he is, he chipped up big time to qualify among 3 Indians to Day 3.

The day began with the final 169 players from a record-breaking Aussie Millions Main Event field of 822 entries. As play went on, we saw the other two Indian players getting eliminated. Paawan Bansal found himself in a blinds vs blinds situation against Kevin Clark, with 8-6 against Bansal’s Queens. Unfortunately, 2-7-5-8-4 on the board meant Bansal lost to a straight and had to exit the tournament.

Next to go was Vinod Megalmani, another fantastic poker player, who has generated quite a big bankroll in recent times playing online. His trip to Australia has been pretty good so far with a 5th place finish in the Terminator Event, and here, he busted when around 100 players were in play, losing AQ vs KK. After an impressive run, he missed out on a cash prize, with only the top 88 players receiving a cheque – a minimum of AUD 15,600 each.

Aditya Sushant was the last of our Indian players in the tournament, and the only one who returned with a profit. He was slightly below the average stack through most of the day and eventually headed out after the money bubble burst. He ended 87th in the Main Event, taking away a prize of AUD 15,600 (~INR 8.05 Lakh).

Play continued after his elimination with Colombia’s Farid Jattin in the lead through most of the day. For more updates from the Crown Casino in Melbourne, keep following GutshotMagazine.com.