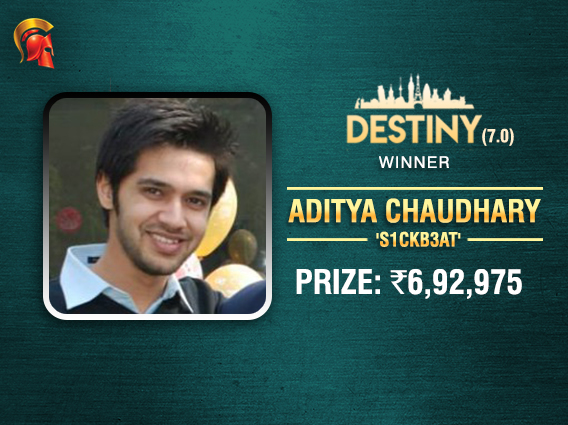 
There are many websites in the Indian online poker scene giving out foreign packages in their promotions and tournaments. Some of them recently announced promotions for sending players to Europe for TIPS. But The Spartan Poker is a platform where their feature tournament of Wednesday gives a chance to win a whopping INR 10 Lakhs package to Europe.

The Destiny 7.0 INR 20 Lakhs GTD tournament began yesterday at 7.30 pm and was in the books by 4:16 am today morning. The event attracted a staggering playing field of 523 entries (including 100 re-entries and 193 re-buys). The guarantee was crushed by a bigger prize pool of INR 26,15,000, which has become quite regular on Spartan.

The winner to be crowned in the Destiny yesterday and also the last Destiny 7.0 winner to enter the Finale SNG on 27th Jan 2019 was well-known grinder Aditya Chaudhary aka ‘S1ckB3at‘. He took home a colossal amount of INR 6,92,975 as 1st place cash prize after beating another known regular in heads-up, Ankush Aryan aka ‘invinciblewolf’, who had to settle for INR 4,31,475, which looks like a 1st place cash win in itself. Aryan is one of the winners of the first Two of a Kind (2.o.K) of 2019 on Spartan

The final hand of heads-up was with relatively even stacks but Chaudhary still leading in chips. Aryan went all-in pre-flop, trusting his Ks Jd. Chaudhary called, packing A6s. The board came to Ad 9c 7s 8d Qh and the eventual winner made an Ace-pair against Aryan’s Ace-high.

The winner, Chaudhary, has accomplished major online achievements in the past. He even shipped a Destiny tournament on Spartan back in July of last year. His recent online win was shipping The Bout on PokerBaazi early last month. He’ll be one of the 10 Destiny 7.0 winners who will all put up a tough competition in the SNG scheduled on 27th Jan 2019. Gutshot got in touch with Chaudhary after his win and he had this to say, “It was a great tournament and had a wonderful structure. This will be my 2nd shot at the Destiny SnG. I hope to run good this time!“

Among the Destiny 7.0 winners on Spartan, some include Sathish Ananth, the first Destiny 7.0 winner, Rajat Sharma, ‘FCKGTO’, Aniket Waghmare, Jayjit Ray, Ratul Steves and Prabhat Saini. They all will be aiming straight at the 10L Europe package, and the most skilful of them all will witness the splendour of Europe in its fullest.

Keep reading GutshotMagazine.com for more such tournament results, promotions and general poker news from around the world.