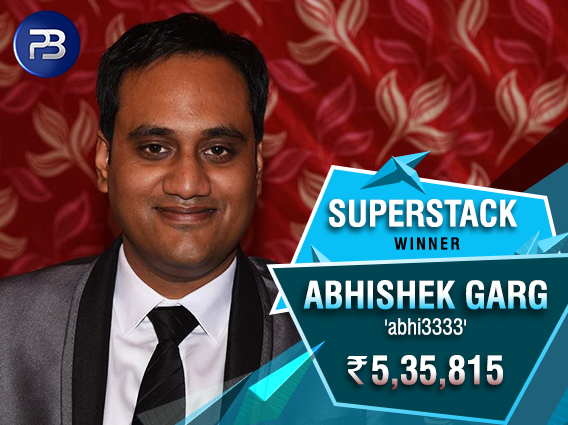 
Abhishek Garg is known as ‘TheGrinder’ across several online poker platforms in India and it’s quite an apt name for him. It’s not easy to grind so many hours each night and it’s even tougher to outlast all the top pros across India to win these tournaments. However, Garg has done pretty well for himself, picking up a win or two every once in a while.

BSS SuperStack INR 25 Lakh GTD is one of PokerBaazi’s most popular weekly tournaments and last night, yet another tournament kicked off with the field being 567 entries and the prize pool swelling up to INR 28.35 Lakh. The spoils were shared among the top 72 places with the min-cash being set at INR 8,788.

In the past, Garg has won several titles in online poker and has even won The Summit on PokerBaazi a few months back. However, this victory last night has to be one of his most satisfying ones yet, taking away the top prize of INR 5,35,815 for his efforts after a gruelling poker session that lasted 8 hours and 32 minutes.

He would’ve been even more delighted with this win as there were quite a few pros in the field. He beat ‘Mavrik’ in heads-up, who had to settle for INR 3,75,637, which is quite a decent pay-out too. Also on the Final Table was Rajesh Kumar Shukla aka ‘intervntion’ who pocketed INR 1,78,888 for finishing 4th.