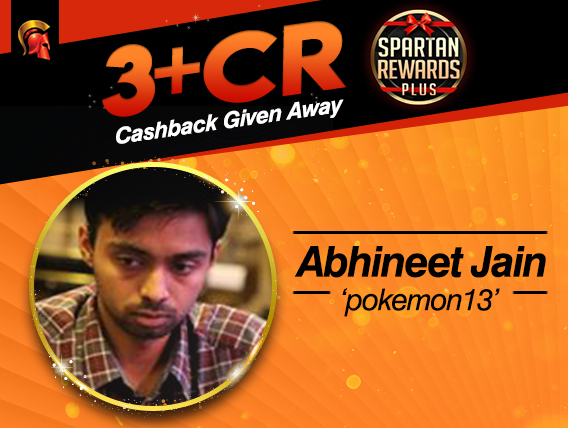 Abhineet Jain gets huge cashback in Spartan Rewards Plus


Every few months, Spartan Poker organizes some of the best promotions to add to the already good list of offerings on their site. To kick off 2019, they started with Spartan Rewards Plus, a promotion that promised 20% to 40% cashback for players generating rake on the cash tables.

The promotion ran till the end of March and gave away massive amounts in cashback to the players who played their heart out on Spartan cash tables. Some of the first players to react to this promotion were Karan Kapoor aka ‘karankapur’, Vaibhav Temani and Dipanjan Das aka ‘trippinbowl’, who spoke to us in January, with only good things to say about this initiative.

The promotion began with the advent of this year. The beauty of the promotion was that no player was left out and while everyone received cashback, some players did extremely well. We are here to report the top beneficiaries of the promotion including online regular and PokerDangal Pro Abhineet Jain. Jain playing under ‘pokemon13’ received huge amounts playing cash tables because of the volume he put in each day. Yes, you read it right, the promotion gave away cashback every day to the players. He figured in the tops of the promotion for the entire duration from 1st Jan to 31st March 2019.

We contacted Jain and he said, “I think Spartan Rewards Plus was very good for the players and especially the bonus offers which was introduced in between multiple times.” About another similar new promotion Spartan which began on 31st March he said, “Also, the new Spartan Royalty Program is much better, and it will generate more action on the site as the rewards that are up for grabs are much higher.”

Top 5 cashback recipients of Rewards Plus are –

The new promotion which Jain mentioned, Spartan Royalty Program, has begun yesterday and will offer luxury prizes like cars, bikes, etc. to players who opt-in using “TREASURE” code. It will also offer cashback to players who use “CASH” code. Unlike the daily settlement in Rewards Plus, this new promo will give away cash points every Sunday morning.

Keep reading GutshotMagazine.com for more such promotional roundups and for general poker news from around the world.