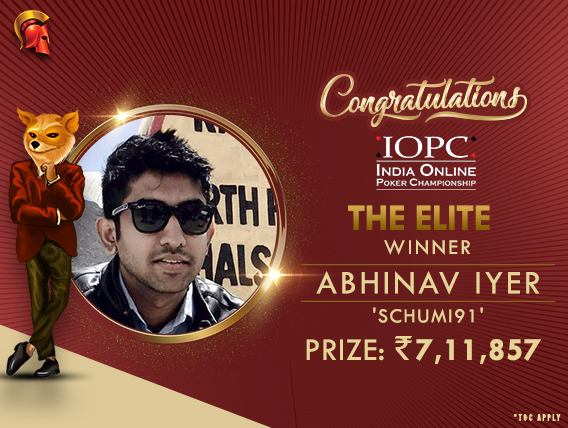 
The Spartan Poker’s latest edition of the renowned India Online Poker Championship (IOPC) is underway and it saw its first day yesterday on their platform. The day was a cash-rich fest and a huge success all in all. There were total of five events hosted for the day with the biggest being its feature tournament – The Elite INR 30 Lakhs GTD.

The Elite began at 7.30 pm in the evening and attracted a staggering field of 412 entries (including 82 re-entries and 130 buy-ins). The buy-in of INR 11,000 was coughed up individually by the field and the guarantee was shattered by a huge margin. The final prize pool came to a staggering INR 41,20,000.

Well-known pro Abhinav Iyer emerged victorious in the Elite yesterday on Spartan after a grind of eight and a half hours, ending at 3.59 am today morning. Iyer took home the 1st place cash prize of INR 7,11,857 for his achievement. He made a heads-up deal with another reg ‘KasolHieghts’ to bag this heavyweight title on Day 1 of IOPC. The runner-up earned the cash prize of INR 6,63,398 for his finish.

Iyer shipped the Elite from Vietnam, where he is currently playing in Asian Poker Tour (APT) Vietnam Kickoff. He entered Day 1B of the Main Event there has progressed to Day 2 too, at 10th in chip counts for the day. He sits comfortably, along with 9 other Indians, in the overall chip counts.

The Elite champion though, Iyer, needs absolutely no introduction, but for the sake of any new entrants to the scene, let us list down a few of his previous achievements. He has plenty of online cashes accumulated in the past from various reputed Indian platforms. Among his live cashes, his recent one came from 2018 WPT India High Roller, where he finished 4th for INR 8,46,000. He has even played in overseas live tournaments in Barcelona and Las Vegas to Manila and Macau. He made his career best live cash at DPT Colossus SHR event coming 4th for over INR 10.9 Lakhs.

We got in touch with Iyer and he had this to say about his win, “It feels great to start the IOPC by winning the Elite. I finally managed to win this event after getting close so many times. I made a HU deal with KasolHieghts who played super good when there were three players left. Really well played and congratulations to him for his deep run.”

The IOPC began yesterday and will run till 20th January. The 10-day affair will see plenty of events hosted to suit all kinds of pockets. Four other events were hosted yesterday in the IOPC. The ultra-high stakes events, The Millionaire INR 1 Crore GTD and the Main Event INR 1.5 Crores GTD is expected to witness a record-breaking turnout.

Keep reading GutshotMagazine.com as we bring you fresh IOPC updates before anyone else and for your daily dose of poker news from across the planet.