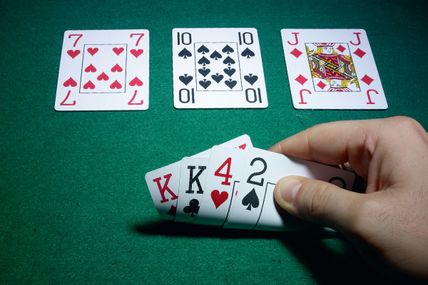 A Basic Guide to Omaha Poker

Omaha, originally referred to as Omaha Hold’em, first appeared in a casino at Las Vegas. Although the exact history of the game including its origin is still unknown. Omaha Hold’em is synonymous with a Poker Hold’em variant known as “Tight Hold’em” where players must use their two hole cards to make a five card hand. In the modern version of the game players can use both or one of their hole cards to create a five card hand.

The action and betting rounds are similar to No Limit Hold’em, however, there are significant differences that must be kept in mind.

Like all other variants of Poker each player buys in with a number of chips. At the end of the game a player’s chips can be traded in for money. The objective of the game, like any other, is simple – win your opponents’ chips.

Playing a Hand of Omaha

The game consists of rounds known as “streets”. Each hand is broken down into four streets known as preflop, flop, turn and river, similar to hold’em.

A round of betting takes place before each street. A “showdown” occurs when more than one player is left in the hand by the river. The remaining players show their hands and the best hand takes the chips or “pot” that is in the middle.

Like Texas Hold’em, a hand of Omaha can be played between two to ten players, with one player being the dealer. The blinds and position rules are again exactly the same as Texas Hold’em.

The player position in Omaha determines the order of betting. The best position at the table is generally considered to be the “Button”.

Pot Limit Omaha (PLO) is the most popular version of Omaha. There is a cap on the total amount which can be raised in any given situation. However, there are also No-Limit Omaha games.

In Pot-Limit-Omaha (PLO) we can raise only to the pot-size at any given time. If your opponent chooses to re-raise you, only then can the betting action continue. He will also be limited to a pot-sized re-raise. Calculating a pot-size raise sounds simple but causes much confusion in the poker world. The majority of poker players possibly do not even know how to calculate a pot-sized raise because –

For most this variant of poker will be tougher to catch on, especially for the ones making a transition from No Limit. While some enjoy the increased complexity of the game. Even reading your own hand takes a lot of work since you are dealt twice as many cards.

It should be considered that Omaha is a game of choice for many players around the world. It’s basically referred to as “Hold’em on Steroids” because big hands are a lot more common in Omaha. In No-Limit Hold’em you will mostly miss the flop. You’ll still miss the flop a fair amount in Omaha, but not as much. The bigger the hand, the bigger the action.