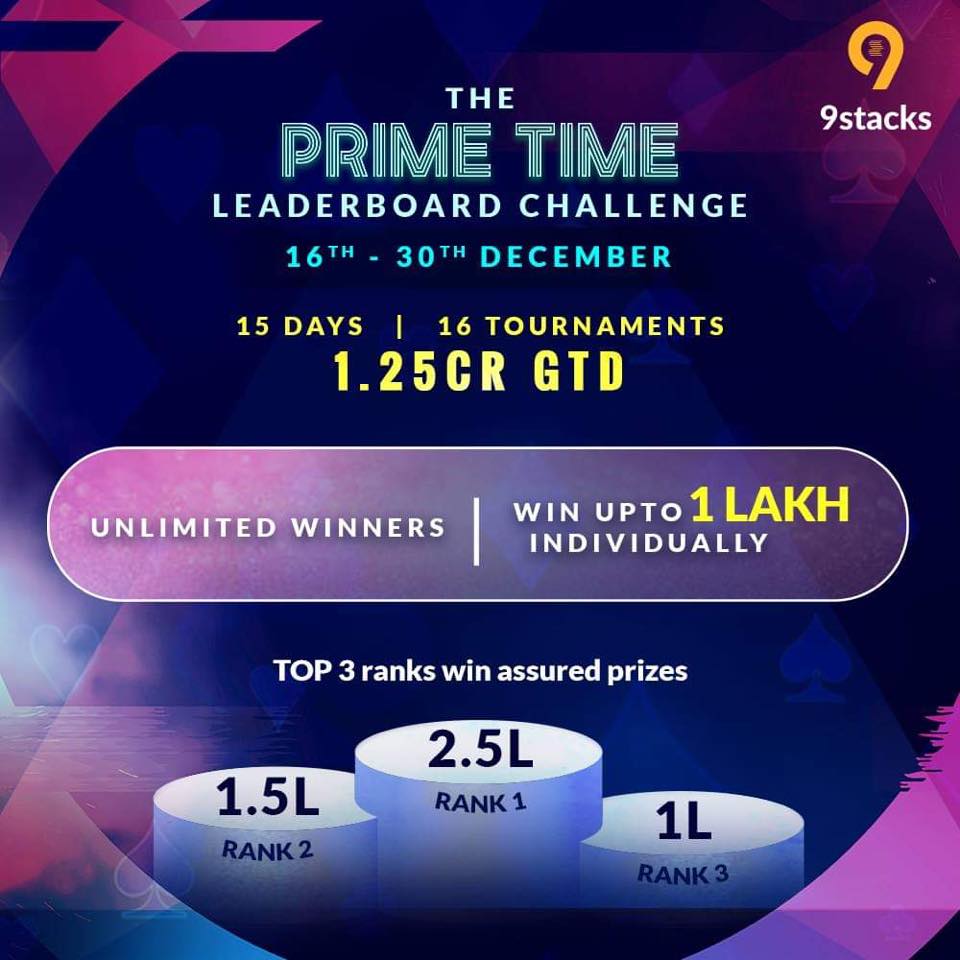 
9Stacks is a reputed online poker platform in this country, hosting a horde of tournaments, series, promotions all around the year. They just recently started a series called ‘Prime Time’ where every day tournaments ranging from INR 5 Lakhs to 15 Lakhs GTD will be hosted on their site. The tournaments are gaining popularity amongst the poker masses.

Top 3 players who rank on the leaderboard will be paid off out of INR 5 Lakhs prize pool. The topper will get INR 2,50,000 and next two will be awarded with INR 1,50,000 and INR 1,00,000, respectively. If two or three players reach a tie, the amount will be shared equally amongst them.

Individual Prime Milestone Prizes allow users to gain points as they play, while also receiving prizes for doing so. All those who reach 300 points will be eligible to get INR 1,00,000 and there is no limit on the number of players that can win this. Prizes start from as low as 220 points, where Prime Stacks Tickets can be redeemed.

Prime MileStone Points will be given based on the player’s position in any tournament during the period. On registering to Monday-Thursday Stacks and Saturday Stacks, a player will get 6 points. On ranking in the money, players will get 12 points and coming in top 3 will get them 25 points. The HI-FRI Stacks players will get 15, 30 and 60 points based on the above category respectively.

There is also something called as the Merry Stacks, which will be hosted on Christmas Day, 25th December at 5pm, which has INR 10 Lakhs GTD. Players who play register for this will get 8 points, and further 16 and 35 points if they rank in the money or top 3. There are also booster prime points, meaning, extra points if you complete a milestone. For example, players who play all 16 tournaments will get 50 points, in addition to whatever they’ve collected already, and so on.

Five deposit codes are being offered to players who want to deposit and earn a ticket to one of the events. Players who deposit INR 1 Lakh or more using ALLSTACKS1L code will get tickets to all the 15 events. The tournaments are all lined up starting tomorrow and the guarantees touch INR 15 Lakhs for some of them. So, stack up your bankroll and head over to 9Stacks to get a taste of the Prime Time Leaderboard Challenge. For more details on the promotion, click here.

Keep reading GutshotMagazine.com for more updates on Indian as well as international tournaments, and much more.