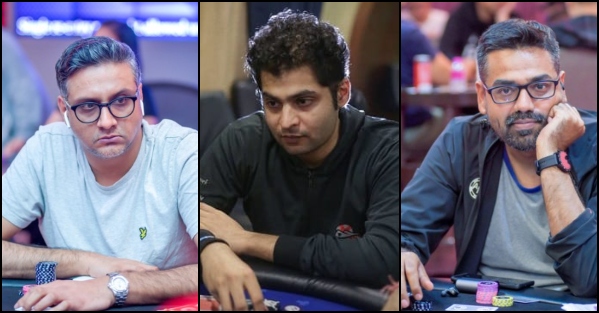 
Unquestionably, yesterday was a busy day in Okada Manila that hosted Day 1B and 1C of the 2020 Red Dragon Main Event which comes with a stunning PHP 50,000,000 GTD. The marquee event of the inaugural festival is underway with the largest ever guarantee to be featured in the Philippines. However, the marvelous destination attracted the best-known players from around the world including a bunch of Indian representatives, making the viewers even more intent to their screens.

Day 1B pulled out 357 players who battled their way to make it through to Day 2, but the field whittled down to only 107 players. Claiming the chip lead was South Korea’s Hwany Lee (picture below) accumulating a stack of 303,500, closely followed by his country companion Jehung Hong bagging 303,000 and China’s Hainan Li in the third place with 251,500 chips.

Day 1C registered a total of 99 entries but only 44 managed to survive the twelve 20-minutes levels of the day. The starting flights altogether saw 669 buy-ins collecting to surpass the guarantee and generate a bigger prize pool of PHP 64,244,070! It was China’s Jun Shi who claimed the day amassing a stack of 164,000. Following his tail was Malaysia’s Kai Fu Wong with 158,500 chips.

The competition was lit with former champions 2017 Red Dragon NLH winners Alan Lau, two-time winner Tom Alner, the 2014 Macau Poker Cup Red Dragon champ Buyanjargal Bold made it through the day. And that’s not it, the field was studded with Indian participation and Ankit Ahuja bagging 79,000 chips, Kanishka Samant with 53,500 chips and Sumit Sapra with 46,500 chips battled their way to take their seats onto Day 2 where they will merge with Day 1A chip leader Sahil Agarwal and Dhaval Mudgal.

Day 2 will commence tomorrow, January 9 at 1 pm local time, combining 212 surviving players into the field. So stay tuned to GutshotMagazine.com for the latest updates on the Red Dragon Main Event and other tournaments around the world!