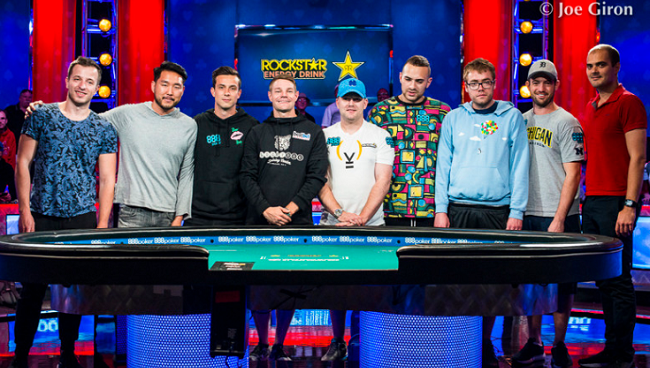 
Seven days of grinding have taken place at the 2018 World Series of Poker Main Event, an annual tournament which is probably the most prestigious poker event in the world. A massive field of 7,874 entries were recorded to this tournament that created a giant prize pool of $74 million.

That field has narrowed down each day and we’re finally down to the last 9 survivors, with Day 7 coming to an end when the final table was set. Today was the first day of play without an Indian player in the mix, with Nishant Sharma finishing in a record 34th place yesterday.

We’re all set for a winner to be crowned tomorrow. It could be a new winner, or it could be a former winner as well, with Joe Cada still in the mix. Cada shipped the 2009 WSOP Main Event for a prize of $8.546 million and if he manages to do it again, he will become only the fifth person to win the Main Event twice!

Technically, he’s just freerolling his way through the 2018 WSOP Main Event. A couple of months back, Manion got an offer to freeroll in a couple of $2,175 Main Event satellites and he got through both. “Recently I’ve just been doing really well, playing well, and running even better. And that’s what’s been going on in the Main Event. So, it’s been great,” he said yesterday.

It’ll be quite a story if someone who didn’t even pay the entry fee can go on to win the Championship Event. Keep reading GutshotMagazine.com to see whether he does go on to win it, or someone else from the survivors goes all the way.